On a night when London's towers and spires are shrouded in a most Sherlockian fog, I shall roll back some weeks, to shine a light on October 1st, and the reception hosted by the Lord Mayor of the City of London, Alderman David Wootton, to wrap up his championing of HRH the Prince of Wales' "Campaign for Wool". 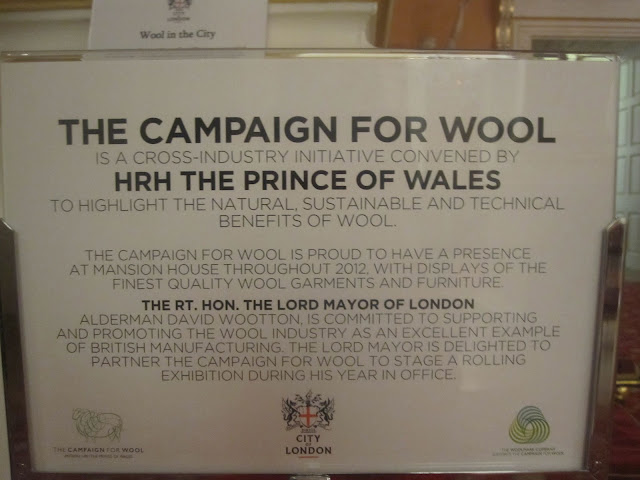 Please note a reference in the photograph above to "the finest quality wool garments" - that'll be us and our generous clothiers of distinction (read on)!!

To recap, the Lord Mayor of the CIty of London, David Wootton, is a Yorkshireman and proud of it. So he was happy to take up the cause, and in so doing, help the mills of his birthplace. During the year he held office at the Mansion House palace he hosted a rolling exhibition of designers doing their best with British wool. You may recall - and if you never knew you can find the full story in the blog back in January - that the invitation was issued to Paul  Smith, Hardy Amies, Anderson & Sheppard, Margaret Howell and your 'umble thimble thumbed tailors from Bedlam. Rumour has it, word's on the street, that our pieces were the most popular / inspired the most conversation and so it was that we were asked to create three more pieces for the wrapping up party.

Now much as this was a great honour and pleased us very much, we were anxious that our less than abundant resources were going into creating clothes on spec for one night, with no assured sale awaiting them. Philip and Martin at Crescent Trading had generously sponsored us for the earlier round of Mansion House events so we didn't want to bother them again (although we made sure they were invited to the event) and so we went to A.W. Hainsworth from Pudsey in West Yorkshire http://hainsworth.co.uk/

Abimelech (now there's a name) Hainsworth, aka ‘Old Bim’, started his clothiers business in 1783. The ancient importance of wool to the British economy and society is set out on the company's website:
"In Tudor England, wool was an important commodity that signified power and influence. So much so that Queen Elizabeth I insisted nobility took their oaths of loyalty kneeling on a woollen sack. Today, the Woolsack remains at the heart of Britain’s democracy and is now the seat of the Lord Speaker in the House of Lords, the Upper House of Parliament in the United Kingdom. The Woolsack is covered in Hainsworth cloth. "

For over two hundred years now they have been supplying the British Army with cloth. My skirt for the Queen's Jubilee celebrations this summer was made of the same scarlet wool they use to dress the Household Cavalry. Seven generations after its founding it is still a family owned company, with a host of Hainsworths on the board (though no Abimelechs currently I don't believe). So we put our case, with cap in hand, to Gill Rushton, manager of their Apparel fabrics, who had helped us solve the great Kersey hunt that had its own dedicated blog posting earlier in the year. She didn't hesitate in organising some beautiful black Barathea and some heavier facing cloth to be sent down for us to use. We were delighted that she was able to come down for the reception.

We were even more delighted and proud to have Philip Pittack and Martin Green in attendance on the night, not least because their warehouse, the source of so much of our fabric suffered a serious fire just days before. We had taken the Lady Mayoress herself for a visit and some fabric foraging. They "boys" rang us on the morning of the reception with the terrible news but assured us they would still attend. We jumped in the car wanting to make sure they were alright and bumped down Brick Lane to see them. Martin, normally a fashion plate with monocle and diamond tie pin, was stood in a puddle in gum boots and Barbour sporting a devastated demeanour, as did Philip. Behind them smouldered their life's work. What wasn't blackened and burnt or reeking of smoke was soaked with the firemen's hose and the rain that had poured through the hole in the roof.

We hoped it would be a little comfort to see their cloth made up into the white dinner jacket and tonic mohair suit later that evening. What we didn't know is that the Lady Mayoress would be wearing the suit made from fabric she had found there too. We hope they took some satisfaction from that and wish them back in business as soon as possible.

There were other contributions that made our display possible. The Bumble Bee jacket and the South Coast Special suit are both lined in sumptuous pure silk, in runny hunny golden yellow. This was generously supplied by Pongees http://www.pongees.co.uk/ and we are most grateful to James and Will for that.


The Toscana lamb fleece that makes the collar of the Bumble Bee jacket so snuggly was provided by waspish Malcolm at Walter Reginald by the old docks at Wapping - http://www.walterreginald.com/about 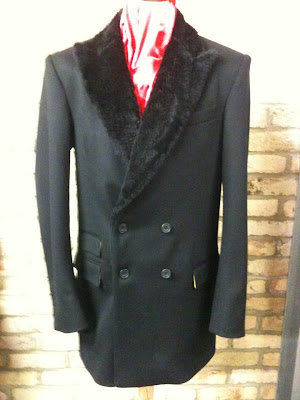 Thanks are also due once again to Tony Dodd the manager of Austin Reed across from Mansion House at 1, Poultry, who helped us out with shirts for the display http://www.austinreed.co.uk/fcp/departmenthome/dept/110anniversary?resetFilters=true

Much fun was had, much wine was drunk and so was I. We were enormously proud to be a part of it and cannot say too many times how grateful we are to those who helped us achieve that. We were mentioned in the Lord Mayor's speech and my mum and dad got to hear that (well, actually they didn't get to hear it, being more deaf than the marble pillars, but they were told). The next day we returned to break down the display and carry our clothes home. But not before Mr Wesley took a turn at the piano with the white double breasted dinner jacket, known as the "Bryan Ferry" - 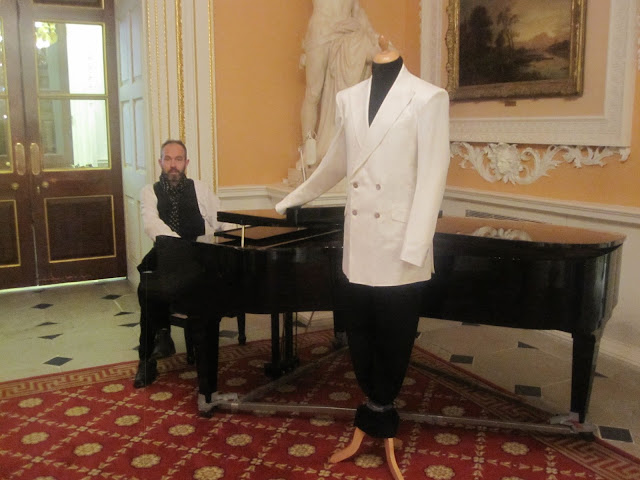 You are lime cordially invited to visit us in the FLESH!

We have now closed the Clapham Road shop to set up our design studio at:
5, Bedlam Mews, off Walnut Tree Walk that runs between the Kennington Road and the Lambeth Walk, (oi!)
SE11 6DF
The cracked ring to that address was irresistible.
Call for an appointment on 07711 160 654
That's also the home of Ocean Colour Screen, our commercial screen printing division. Promote your business or wear your art on your sleeve. Please email mark@earlofbedlam.co.uk for quotes.

Promote Your Page Too